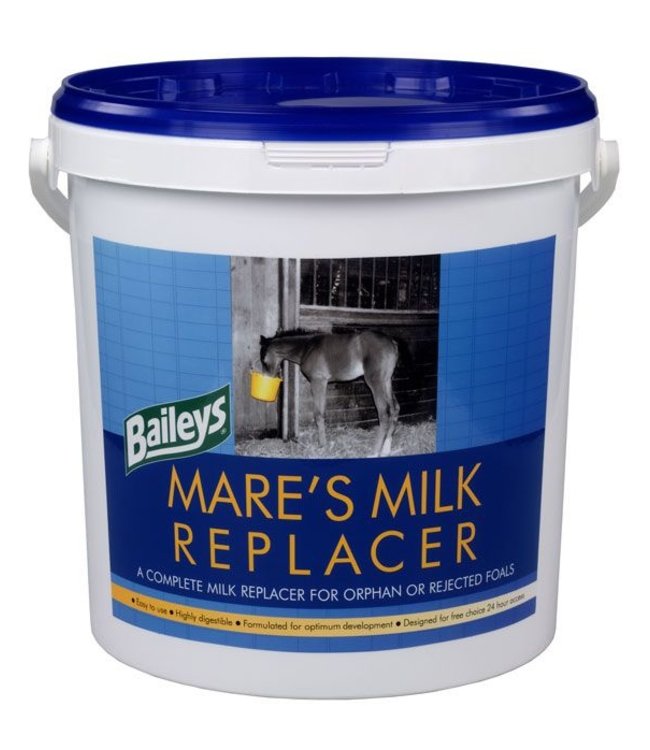 Mare’s Milk Replacer is a complete milk substitute formulated for the orphan or rejected foal or for those foals who are, for whatever reason, not receiving sufficient milk from their dams. It contains the highest quality milk proteins, vitamins and minerals necessary for optimum growth. Being formulated to be mixed with cool tap water, Mare’s Milk Replacer is best fed from a bucket with the foal allowed access 24 hours a day. This allows the foal to drink as often as if the mare was present so that there is a natural, even flow of milk through the digestive system.

When made up, Mare's Milk Replacer has a tart taste which discourages the foal from drinking too much milk at any one time. It is also slightly acidic (pH5.3 + .01) to help maintain the normal pH level in the foal’s digestive system and to aid in the preservation of the milk after mixing with water. All these factors result in the foal being fed as naturally as possible with fewer digestive upsets, improved milk digestibility and progressive growth, with the added advantage of not having to hand feed the foal every few hours.

Please accept cookies to help us improve this website Is this OK? YesNoMore on cookies »
← Return to the back office    This store is under construction Any orders placed will not be honored or fulfilled Hide

Be first to hear our latest offers & news

By creating an account with our store, you will be able to move through the checkout process faster, store multiple addresses, view and track your orders in your account, and more.

You have no items in your shopping cart